√ An awesome valley walk, underground city and traditional village.
√ See traditional and historical Cappadocia both inside and out.
√ You can adapt this tour to your interests.

SUMMARY: Hike in Red/Rose Valley for 4-6 km with awesome views and surprizes around every corner in the rocky landscape. The walk ends in Cavusin village where there is a rock castle which once housed all the inhabitants. After lunch go underground in either Kaymakli or Derinkuyu to explore one of these incredible underground cities where the inhabitants were completetly protected from the outside world. End the day in the old Greek village of Mustafapasa (Greek name Sinassos) with its beautiful Medrese doorway and turning pillar, the 19th century church of Constantine and Helena, and traditional stone houses with detailed stone decorations. You can even h

PRIVATE INSIDE OUT TOUR DETAILS 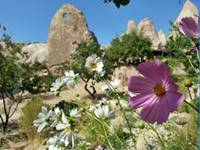 RED & ROSE VALLEY WALK. Hike in Cappadocia’s most beautiful valleys and countryside. Escape the crowds – get into nature – feel the spirit of the landscape – explore cave churches, pigeon houses, natural tunnels carved by running water – walk through the grape gardens of the locals with their fruit and nut trees – this is the REAL, AWESOME CAPPADOCIA that has existed for millenia, a paradise not seen on the regular tours. BOOK by EMAIL ›› 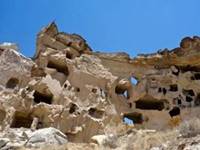 CAVUSIN CASTLE, at the end of the walk, is a spectacular rock citadel that once housed everyone in the village. While it was a relatively safe place to live, the villagers had to carry their water up to their homes every day. The village was home to many Christians, and Saint John the Baptist’s Church, despite its poor condition, is still worth finding. You can also follow a narrow path to the top of the castle visiting some of the more recently lived–in homes on the way. As you descend on the other side there are some lovely examples of fairy chimneys. BOOK by EMAIL ››

KAYMAKLI UNDERGROUND CITY is one of the most amazing man–made wonders of the world. Although all towns and villages in Cappadocia once had safe and secure secret rooms dug out of the soft tufa (tuff) rock, the underground cities of Kaymakli and Derinkuyu are intrinsically different because their size, scale, and evidence of underground city planning. Up to 50 meters deep and 3 kilometers wide, as many as 5,000 people were able to hide safely underground out of site of the enemy, with their store of food that could last for months if necessary. 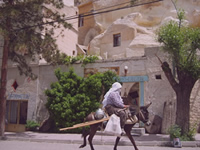 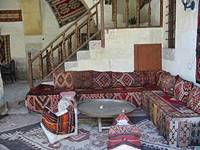