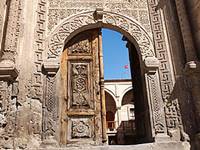 MUSTAFAPASA (SINASSOS) town remained predominantly Christian throughout the Seljuk and early Ottoman periods, although the Muslim population increased from then on. The Byzantine Greek (Christian) population in the area kept alive their language over the centuries and even developed their own unique dialect. Sinasos, the Greek name for the town, became wealthy by trading with Istanbul, and some splendid old stone Greek houses rich in decoratively carved symbols are not to be missed. 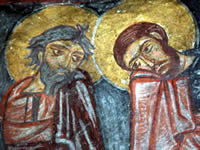 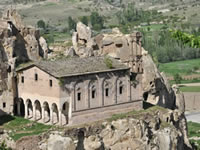 CEMIL VILLAGE is one of the completely authentic farming villages of the region where some people live in former mansions and some in caves. It has a stone–built church with reasonably well preserved decorations dated 1916 and the frescos on the pillars are very unusual.Can you spot this church from the main road? BOOK by EMAIL ›› 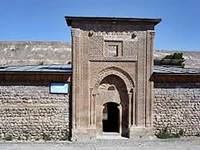 TASKINPASA takes its name from the Turkish philosopher, Tashun, who taught in the now ruined local Medrese (Madrasa or Islamic Theological School). The Medrese building, the nearby mosque and Tashun Pasha’s tomb were built in the 14th century by the Karamanids using classical Seljuk style stone decoration. You will be amazed by the detail of the stonework on the Medrese doorway. BOOK by EMAIL ›› 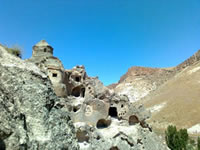 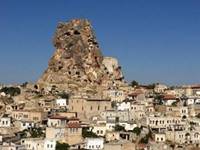 ORTAHISAR CASTLE is the "middle" castle in Cappadocia, between Urgup’s main castle and the last castle at Uchisar. Some people in this village still live in cave homes, and you will also see many pigeon houses that provide the best fertilizer for the volcanic Cappadocian soil. BOOK by EMAIL ››