√ An awesome valley walk and essential sightseeing on each day.
√ Walk in the real Cappadocia that has been the same for millenia.
√ You can adapt this tour to your interests.

HIKE IN CAPPADOCIA’S MOST BEAUTIFUL VALLEYS AND COUNTRYSIDE. Escape the crowds – get into nature – feel the spirit of the landscape – explore cave churches, pigeon houses, natural tunnels carved by running water – walk through the grape gardens of the locals with their fruit and nut trees – this is the REAL, AWESOME CAPPADOCIA that has existed for millenia, a paradise not seen on the regular tours. 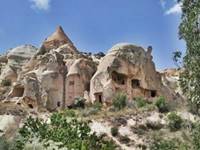 RED, ROSE & MESKENDIR valleys are the best in the region, situated between Ortahisar sunset point and Cavusin Castle. At the end of the valley walk you can go on to explore the castle which is home to Saint John’s Church, the oldest church in the area, and you can go to the top of the castle and walk down the other side past some lesser–seen fairy chimneys. You can even walk on to Pasabaglari for the 3–headed fairy chimneys. 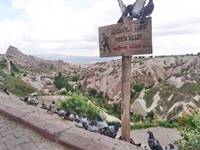 PIGEON VALLEY walk takes you past many pigeon houses high up in the rocks. The quano from the pigeons is the best fertilizer for the Cappadocian volcanic soil, and you will wonder how the local people entered the pigeon houses to collect this valuable wonder of nature. The treck also goes past Uchisar Castle and through beautiful valleys with grape, fruit and nut tree gardens all the way to Goreme Village, where the hustle and bustle will make you feel you have left paradise behind.

LOVE VALLEY hike really goes through two valleys where the locals grow vines and fruit and nut trees. The famouns phallic shaped rocks of Love Valley towards the end of the trek are spectacular and you can walk around these tall pillars and explore the caves at the base of some of them. (When writing this I discovered there are no synonyms for phallic in the online thesaurus – lol!) BOOK by EMAIL ›› 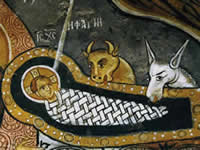 KAYMAKLI UNDERGROUND CITY is one of the most amazing man–made wonders of the world. Although all towns and villages in Cappadocia once had safe and secure secret rooms dug out of the soft tufa (tuff) rock, the underground cities of Kaymakli and Derinkuyu are intrinsically different because their size, scale, and evidence of underground city planning. Up to 50 meters deep and 3 kilometers wide, as many as 5,000 people were able to hide safely underground out of site of the enemy, with their store of food that could last for months if necessary. 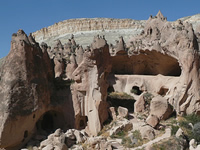 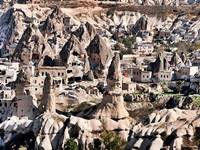 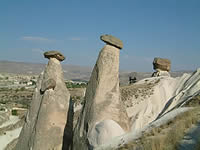